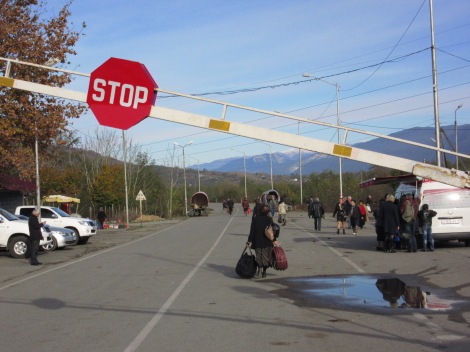 Who’s ever heard of Abkhazia? I hadn’t until I made plans to meet up with Allan, the traveller with an epic moustache who gave me my first ride in Armenia.

Abkhazia is a disputed territory and partially recognised state in north west Georgia on the border with Russia. When the Soviet Union began to disintegrate in the 19802, ethnic tensions grew between the Abkhaz and Georgia over the latter’s move towards independence. This led to the 1992-1993 war which resulted in the defeat of Georgia, de facto independence of Abkhazia and the mass exodus and ethnic cleansing of the Georgian population from Abkhazia. In spite of the 1994 ceasefire agreement, the dispute has not been resolved and the conflict has flared up on several occasions. In August 2008 the sides again fought during the South Ossetia War, after which Russia recognised Abkhazia and the 1994 agreement was annulled. Georgia then declared Abkhazia a Russian-occupied territory.

While only recognised by four other states – Russia, Nicaragua, Venezuela and Naru – Abkhazia has its own government and flag. Travellers also need a visa to visit. I duly filled out the application form and emailed it off to the consulate, later asking for entry a few days earlier than the five working days it takes to process an application. The consulate granted me entry and sent me the clearance letter.

So, knowing barely anything about this territory I made tracks to meet Allan in Zugdidi in west Georgia. I found him, we found a place to stay at Nana’s homestay, went for a wander around town, ate some food, checked out the map, printed our clearance letters, Allan got his paws on some Russian roubles (the accepted currency in Abkhazia) and by 11am on Thursday we were checked out of Georgia and walking across the Enguri Bridge towards the Abkhazi border.

The bridge spans a beautiful river and the trees on either side are shades of green and yellow. The mountains in the distance, snow-topped and glinting in the sunshine, promised magnificent countryside vistas. 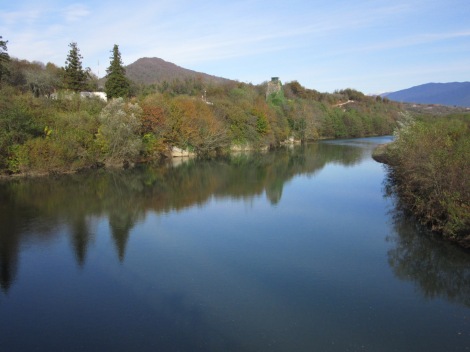 The walk across the bridge is a slow one, not least because the road is potholed and rutted and people walk across carrying all their belongings or take the ride in a basic, clankey horse-drawn carriage. We passed old men shuffling along with the aid of their walking sticks and wizened woman carrying bulging plastic shopping bags. Most people smiled and greeted us, or stopped to ask us where we were from; Allan’s “London” usually elicted some excitement. 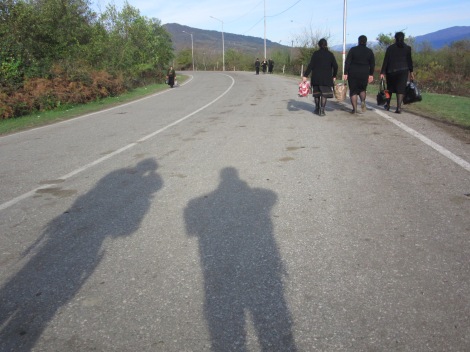 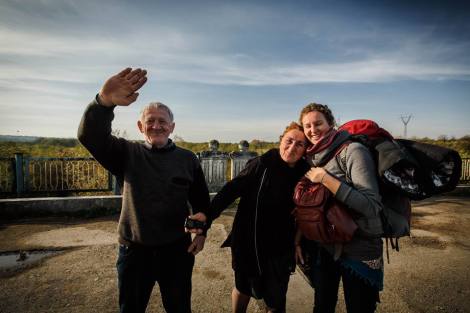 The long walk across Enguri Bridge between Georgia and Abkhazia.

After stopping to take photographs of the mountain view and people on the brigde we arrived at the Abkhazi border post. We tried out a greeting in Russian and handed over our passports and clearance letters. The border guard made a call on his cellphone, presumably to some office about our arrival. He then asked to see our photographs. I understood he was checking to see if the border post was visible in any of the pics. It was and he asked me to delete the pic. Allan then handed over his camera with his photographs of the Svaneti mountains; he had already deleted the day’s pics he told the guard. Sneaky one that he is, he had actually just changed the memory card.

These checks done and awaiting our final clearance we started chatting to the guard. We managed to get by with some English, a little Russian and much body language. And crazily, this guard knew about Ingrid Jonker, a South African poet who died by walking into the waves and drowing herself. This all the guard mimed to me so I could figure out who he was talking about. He later showed me a photograph of a building (it may have been in Abkazia, I didn’t understand that part) which bears lines from one of Jonker’s poems, Die Kind.

By now it was lunchtime and we were still no nearing to getting into Abkhazia. At last the “boss” came down with a list and promised to nag the consulate about our visas. We continued waiting, now with a Czech backpacker who was two months into his 3-5 year around the world hitchhiking adventure. Although Pavel spoke some Russian, no one could tell us when we could get past the border post.

A few mandarins and kiwi fruits later Pavel left us to our waiting.  By now we had formed a relationship with the border guard and the guys ferrying sacks of grain, boxes of fruit and other ‘imports’ through border control. Our guard brought us each a can of neon green tarragon-flavoured soda. Then a huge red apple from a man passing through and a loaf of the local bread. We settled down on the car seat against the fence with our lunch. 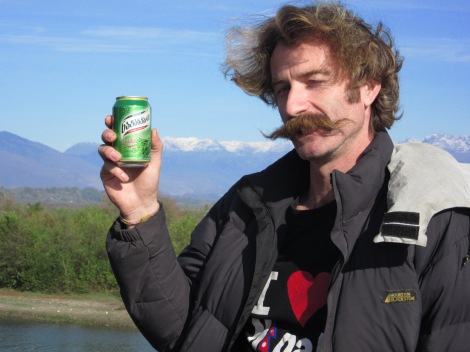 Allan, his moustache, our donated soda and the mountains – the closest we got.

And so another hour passed. And then another. We continued chatting to the guards and other people passing by. We saw a lot of really funny things. My best was a woman carrying a lamb in a sack, its knees poking through the corners and bleating plaintively as it swung from her hands. We saw many old men and women, most of them pushing trolleys piled high with boxes of apples, aurbergines and pomegranates (our guard lifted one for us to eat). People came through carrying all manner of things, mostly car parts (one young woman carried through an entire front fender) and home renovation equipment.

Only a few cars passed through, a few of them white 4x4s emblazoned with EU refugee logos. All the other vehicles were run down clanking machines loaded to the hilt.

The afternoon passed and the shadows grew longer. Allan and I gave it another 15 minutes – we were still hopeful that the call would come through from the ministry granting us entrance. We waited another 30 minutes. Still nothing. With long faces we made 5pm our cut off time; it was that or sleep at the border post.

And finally, after a whole day spent waiting, we called it. What could we do? We said an almost emotional goodbye to the guard, climbed into a dusty van which the driver started with exposed cables and drove back to the Georgian side. Oh, poor Allan, he looked ready to cry.

Allan reckoned we messed up when he didn’t show his pics to the guard. Maybe this made the guard suspicious and officials higher up could have checked our names online and found our blogs (Allan at yesmonassa.com). Maybe we looked like press. Maybe it was a mistake to note my former magazine job as my employer (I’m always wary of writing ‘unemployed’ on visa applications). I’m not sold on Allan’s theory but we still don’t know why we didn’t get in. A clear rejection would have been better.

Thank goodness for Allan’s company. With him I was able to keep calm and laugh at our situation, enjoy the experience of interacting with all sorts of people passing by – most of whom merely waved their passport or laminated ID document at the guard – and turn our waiting day into a ome of those timeless travel stories.

As for Abkhazia, it remains a mystery to me.

2 responses to “The long wait into Abkhazia”

I've packed my toothbrush, charged my camera and am off on an adventure!

I'll be wandering around the Med for the summer with open eyes and a happy smile. I hope you enjoy my stories along the way!